When Sou Fujimoto was a kid growing up in rural Hokkaido in the 1970s, he was fascinated by nature. So when he moved to Tokyo as a young man, you could reasonably assume he’d have hated one of the most populous metropolises in the world—a vast grey sprawl of small houses and boxy apartment buildings.

But that wasn’t the case at all. “I liked Tokyo very much, which was surprising to me,” recalls the architect. It turned out Fujimoto was fascinated by Tokyo for the same reasons he loved nature. The city felt alive and organic, full of fascinating little details such as shop awnings and electrical wires. Like a forest, the city is a framework of life: solid but also nebulous, beautiful at any given moment, but ever-changing.

You can say the same about Fujimoto’s buildings. Since launching his own architectural practice in 2000, he has designed houses, apartment towers and retail complexes that feel less like buildings and more like loose skeletons that wrap themselves around the lives of their inhabitants. “Something between nature and architecture” is how Fujimoto describes his approach to design. 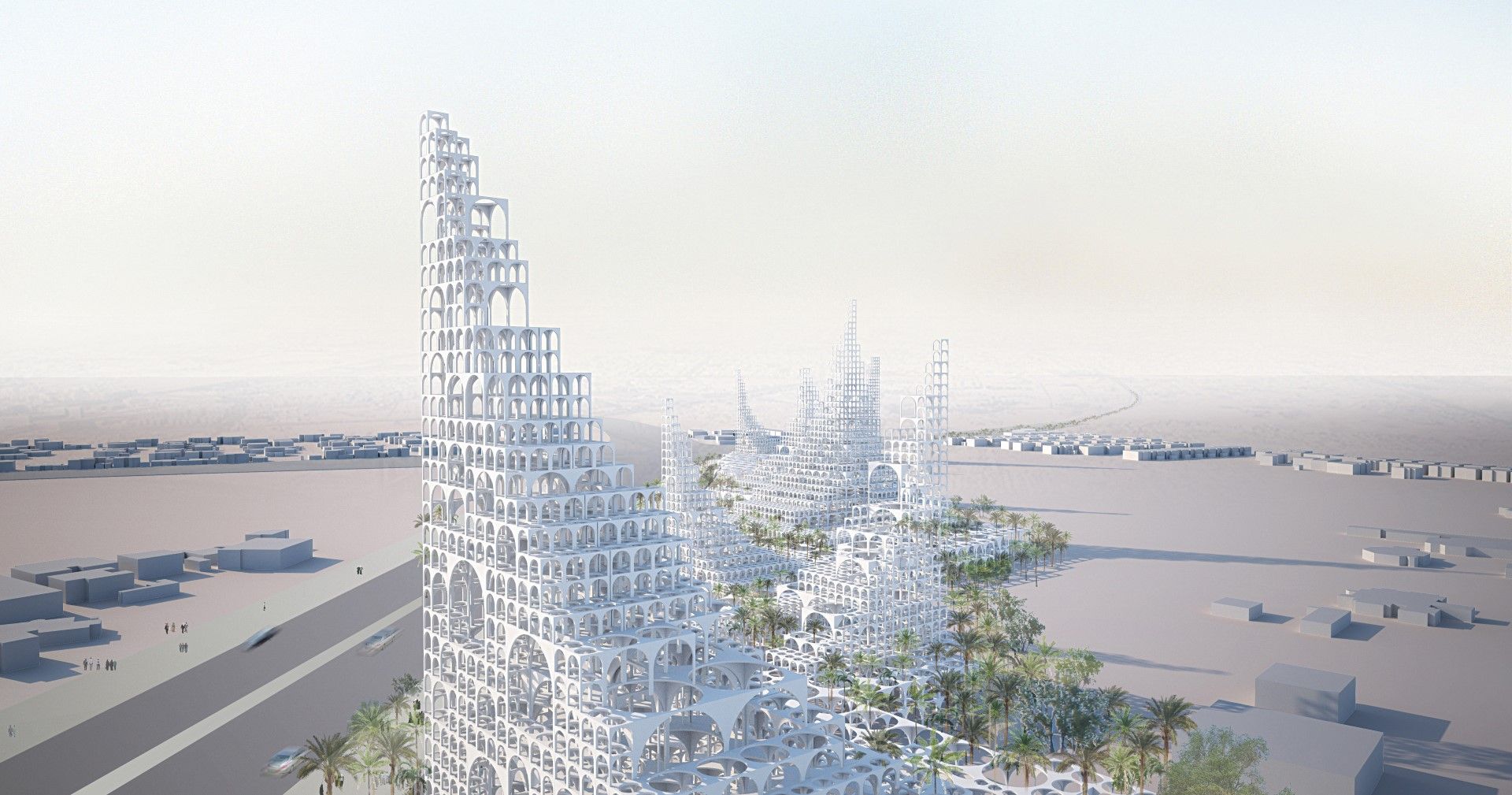 “Every time the division between architecture and nature starts to blur, we can find something new in between”
The seeds of that idea were planted in some of Fujimoto’s early residential work in Tokyo. House N is a house in the city that was completed in 2008. It frames a garden and living area with a series of concrete walls punctuated by large rectangular openings—some glazed, with others open to the elements. Its spiritual descendant is House NA, built in 2012 on a 592sqft lot for a young couple that wanted a radically transparent living space. Fujimoto gave them a simple white steel frame that contains a series of 21 staggered platforms—a kind of grown-up treehouse where the boundaries between the indoors and outdoors disappear. “My dream is to create architecture without walls,” he explains. Fujimoto caught the world’s attention with his design for the 2013 Serpentine Pavilion, part of the annual series of installations by world-renowned architects including Frank Gehry, Oscar Niemeyer, Zaha Hadid and Jean Nouvel. Fujimoto’s pavilion was a mesmerising lattice of white poles that floated upwards like a pixelated cloud. At the time, he said he wanted to play with the contrast between the “really sharp, artificial white grids and the organic, formless experience” of walking through the space.

Since then, Fujimoto’s work has garnered plenty of attention in the press and on social media, leading to more and more international work such as the Bookchair, which he produced in 2017 for Italian furniture brand Alias. A white grid-shaped bookcase that incorporates a pull-out chair, the piece taps into the same aesthetic as House NA as well as the Serpentine Pavilion. 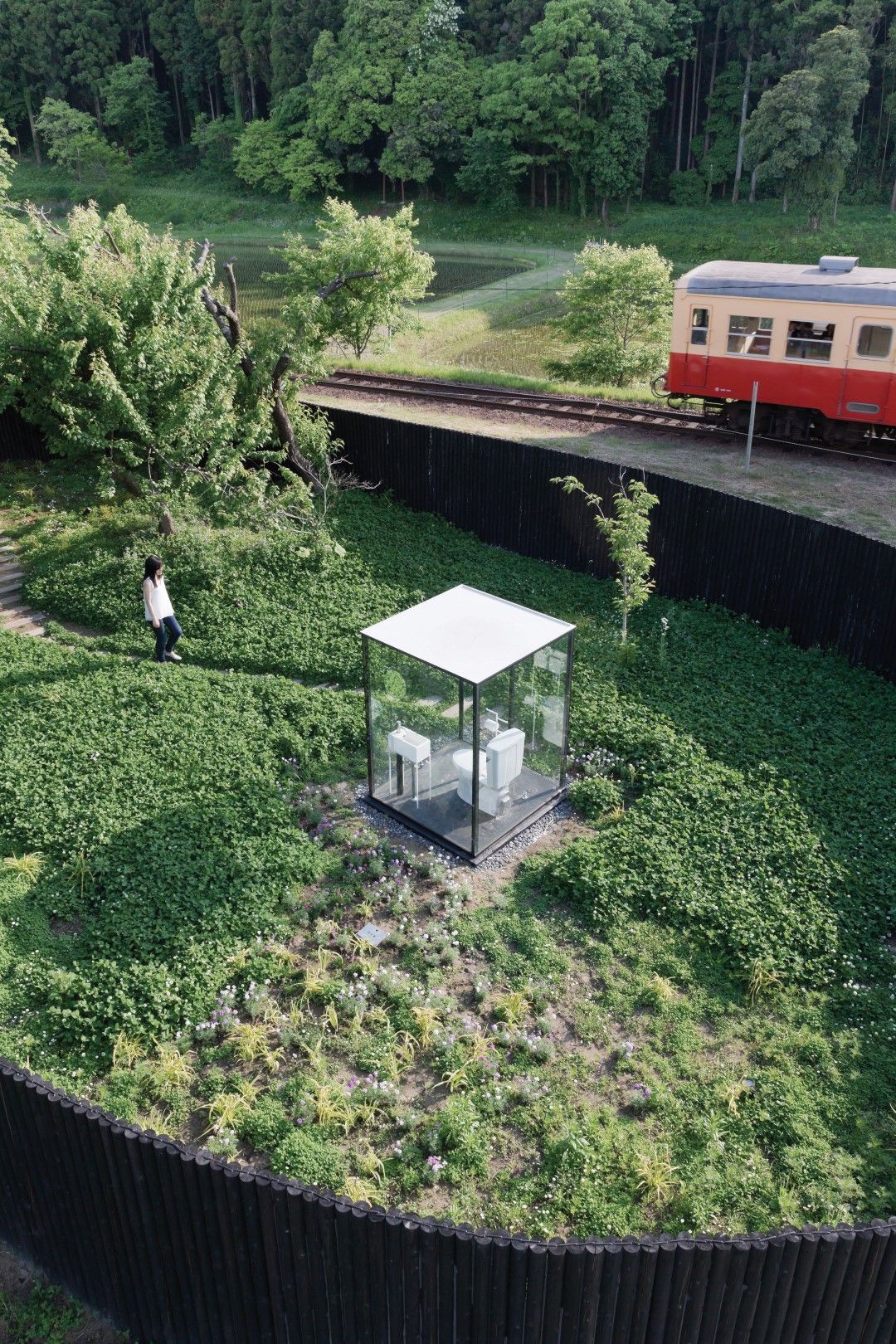 Toilet in Nature minimises the boundaries between the manmade structure and surrounding greenery, with a wooden log fence providing privacy

But Fujimoto seems less interested in developing that white-grid aesthetic than in promoting the boundary-blurring ideas that originally led to it. His 2013 design for a public toilet in the countryside of Ichihara, Japan, called for a glass box planted in the middle of a lush walled garden. “It’s quite simple—it’s a glass box, a wall and a door,” he says. “It looks like a funny project, but I was quite serious.”

Two recent projects apply that sensibility on an even larger scale. L’Arbre Blanc is an apartment tower currently under construction in Montpellier, France. Inspired by the city’s mild climate and Mediterranean lifestyle, with its penchant for outdoor socialising and dining, Fujimoto surrounded the building with huge balconies of varying depths. These balconies give residents a chance to create their own outdoor spaces and gardens, which will have the effect of turning the apartment building into a dynamic monument to its residents’ own personalities.

For another French project, Milles Arbres, Fujimoto plans to bridge a Parisian expressway with a mixed-use complex that will include two garden levels—hence its name, which means “thousand trees”. The rooftop will even be studded by small houses, giving its residents the unique experience of living in a forest in the middle of metropolitan Paris. Whether it’s a toilet in the woods or a building that contains a forest, Fujimoto thinks the ideas behind his work can be scaled up to even greater heights. “The concept can be expanded,” he says. “Every time the division between architecture and nature starts to blur, we can find something new in between.”

This Gorgeous Private Island In The Bahamas Is on Sale For $100 Million December 10, 2021